My Own Journey with Awakening

I began my healing journey in my early-20’s while I was getting my degree in Marriage and Family Therapy. I was lucky to be part of a progressive program that emphasized mindfulness and lovingkindness practice and the importance of clinicians doing their own work. I was anorexic and a workaholic and a perfectionist and so full of self-hate. I recognize now how lucky I am that my mind accepted early on that self-hate wasn’t going to fix anything - I knew I would have to learn to love myself.

After grad school, exhausted and run down, I decided to hike part of the Appalachian Trail. I got lab results before leaving that scared me into gaining some weight, and hiking forced me to eat larger and larger portions every couple of hours. I ended up hiking for two and a half months, and it was important for me. I was in tune with nature’s rhythms and had detoxed from all the stimulation I had been used to in school. I gained weight and truly began to recover from my eating disorder.

I began to attend meditation retreats at 26. I saw the peace with which the teachers walked, and in Buddhism I found a worldview that made sense to me for the first time. I emerged from that retreat gittering - more present, more loving, and more joyful. I was hooked.

I quickly signed up for longer and longer retreats - 2-weeks, 6-weeks, and then 3-months. Initially retreats made my life easier. I was able to take in to some extent that thought and emotion was impersonal, and patterns started changing. I felt much more compassionate towards myself and was slowly learning to take better care of myself. However, I also learned that if I opened to feelings in my body, they would go away. For a long time, I desperately wanted to manage my life this way. It didn’t work for very long, and ultimately I’m grateful.

I started to have pain when practicing pretty early on in my practice. I chalked this up to bad posture and bad body mechanics. On a 3-month retreat I sat one fall, everything fell apart. I was on the retreat with my ex-best friend who I was incredibly angry with, but I wasn’t comfortable with my anger so I fought with myself. I was contemplating leaving the relationship I was in. And I injured my foot on the 5th day and decided to stay despite the likelihood that I would need surgery to fix it. This caused more and more pain. Though the pain was mostly not in my foot, I attributed it to that injury. I also started twitching, my body beginning to discharge pockets of egoic stress.

When I left that retreat, I was incredibly depressed and broken down. I could no longer practice because it triggered panic. I could no longer use the practice to get away from painful emotions and aspects of my personality. I was forced to turn elsewhere.

I began to look at the ways I was spiritually bypassing more earnestly, and came to understand more clearly why bypassing would never ultimately work. I knew I would have to face everything I was avoiding, so I did. I made a practice of with thoughtfulness and care, moving towards or doing what I was afraid of. I also began to see a somatic therapist and began training in various somatic trauma resolution modalities, including Somatic Experiencing. I explored healing my own feminine energy which was at the same time empowering, softening, and brought me into deep intimacy with myself in a new way.

As with everything I do, I dug super deep and was super committed. I was desperate to truly heal. And I was healing. I became much more empowered and was willing to set boundaries. I was able to feel my body’s cues and was more willing to follow them. I felt a sense of wholeness and inner stability more frequently. At the same time, life was becoming more and more physically intense and I didn’t understand why.

I went through a devastating break-up, with the first man I’d truly wanted to marry, and deeper trauma surfaced. I had insomnia at a level that didn’t make sense to me, and I felt charged all the time. Whenever I went on retreat, I dove deep. I began to have what I called “emotional storms” where I would get really stuck in the physical intensity of an emotion in a different way than I had ever experienced before. I continued to twitch when I meditated, and several times experienced intense electric energy shooting up and down my spine. As a somatic therapist, I thought it was cool, but assumed it was normal - just the body discharging energy. When I went on retreat, I would get more sensitive, which made coming off retreat increasingly challenging. Unfortunately, I was so committed to retreats that I didn’t see this pattern at the time.

My body became more and more worn down. I continued to do too much - too many trainings, too much socializing, too much work, too much putting my mind's agenda before what I was really needing. During my first touch-focused training I realized I could easily feel what was happening in the energetic systems of the people I touched. This was not something I believed was possible before experiencing it myself.

I went on one more retreat and settled deeply. Emerging from that rest was damaging, and I ended up in the ER two weeks later. I was diagnosed with autoimmune conditions and anemia. I changed my diet dramatically and started a bunch of supplements . . . and I didn’t get better. My labs were back to almost normal levels, but at this point, doing literally anything was a struggle. It was terrifying.

I had been planning to leave my beloved Carrboro community and travel and dharma bum (bounce around between meditation centers). Because my diet was so restricted, this was no longer possible. So I took a month off just to rest. I began to have panic attacks. I was terrified of making my conditions worse and everything felt like a threat. My body began to move in spontaneous ways. I assumed it was processing old traumas and this didn’t clue me in that something unusual was happening.

But towards the end of that month, this love woke up that I had never experienced before. I had done countless hours of Metta practice, but my experience had always been that the warmth that arose was created by me, and that it was conditional, (though less and less so as my ego processed it's resistance). This was different - this Love was not created by me, it was received. It was always there, no matter what was happening, as an energy in my spine. It loved without reason or boundary. It simply loved, everyone and everything, all the time. No exceptions. As a resource, it couldn't have arrived at a more needed time, and I took respite in it whenever I could.

I flew to Bali, not knowing how long I would be there or what I would do next. I rented a little cottage, and isolated myself. I worked a few hours a week, and practiced with the rest of my time. I could barely sit up, I was so sick and exhausted. Leaving the house was a nightmare.

But . . . I had an opening a month after my arrival. As I was reading a piece of writing by Mukti on Stillness, the energy in my spine recognized itself and exploded out of my spine and into my whole body. I could see that that Stillness did not have a self. It was always ok. It extended outside of myself, though fear kept it from extending very far at first. And it didn’t differentiate between aspects of my experience or environment.

I really had no idea what was going on. An actual experience of awakening upended most of my assumptions about what it was. But all this spinal activation finally had me wondering about kundalini. I met with an expert who confirmed this was what I was dealing with.

I am still putting the puzzle pieces together - understanding the clues I missed over the years. Kundalini caused my autoimmune conditions, my twitching, my sensitivity, my ability to read the bodies of others, my insomnia, my awakening. While external events contributed, the primary driver of my decent into dysfunction was kundalini. When kundalini opens fully, it will not let up until the ego has entirely let go. It was fairly daunting to realize this, but also a relief. At least I finally understood why I was struggling so much, despite having a mediocre trauma history. Regular middle class white lady trauma.

With that knowledge, I did what I am good at - I dove into understanding awakening and what it was asking of me. During the six months I was in Bali, I had deeper and deeper experiences of what I realized was simply Reality. My sense of self loosened. My panic attacks became less and less frequent and severe.

But I was still using so much effort in practice. Practice was driven by very intense controlling energy, and this prevented much of the growth that was needed because my system was too rigid - physically braced against it, though I wanted it desperately.

I had one more panic attack. I was so broken down, so tired of forcing my will and failing. I felt suicidal. It all felt so pointless and hopeless. I finally fell asleep for a few hours and when I woke up the next morning, as panic arose again, I couldn’t fight it. I had given up. It was my system’s first true experience of surrender. And it felt GREAT. My energy levels improved and I was able to move around more. I was able to socialize with slightly less difficulty. I was able to start seeing more clients. My vision widened. I stopped being able to feel the edges of my body. And my panic attacks gradually stopped.

I came home to the US and moved the NC mountains, where I could continue to live cheaply and work part-time. The openings have continued with intensity. The sense of self feels thinner and thinner, and as that happens, I heal. I continue to surrender my conditioning to the wisdom of Love and the Immensity. While my experience is still intense, things that used to bother me bother me less and less.

More and more, I love for no reason. I meet the moment nakedly, with no expectations. I surrender my agenda for Reality’s.

I began to feel moved to offer spiritual teaching and therapy, and was authorized to begin teaching by my own teacher, Erin Treat. My own teaching emphasizes integration, spiritual bypassing, the body, and nervous system healing. It feels like the culmination of a lifetime of deeply asking the Universe to unveil its secrets to me. It is clearly what I’m here to offer. I see now how I made the journey more difficult for myself, and how I can support others in choosing easier paths.

Ultimately this is just about recognizing the Truth. And deep down, this is something we all want. We will never feel at ease until we are in alignment with it.

My journey is far from over, but it is less and less my own. I am grateful now for every step. And excited to see where the next fork in the road takes me . . .

(All pictures are from my time in Bali) 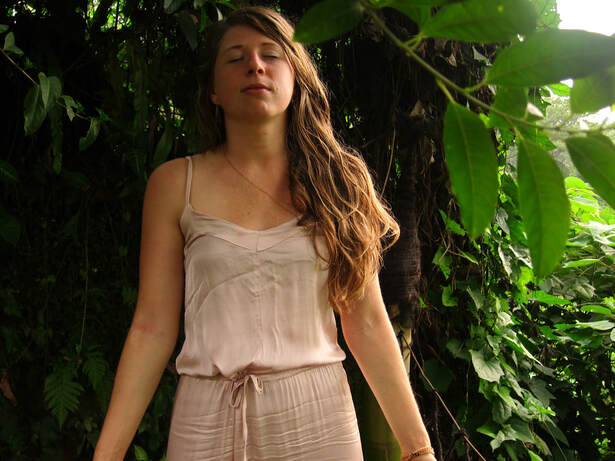